RODEO has been launched to respond to a Call for Project from the European Clean Sky 2 Joint Undertaking. The consortium consists in five partners: three industrial companies (PRECISE as orbital drilling solutions provider; KUKA as robotic integrator; and MITIS as expert in drilling technologies and processes) and two research labs, respectively parts of Université Toulouse 3 Paul Sabatier and of Université de Nantes.

The main objective of the RODEO project was to propose lightweight robotized orbital milling equipment as well as appropriate cutting tools and operating conditions, to enable drilling of tightly spaced small diameter holes in aluminium with the control of induced residual stresses. This has been accomplished by:

The RODEO project has produced the expected results. 2D and 3D modeling work on the residual stresses induced by a helical burnishing operation in aluminum holes was carried out and allows to better understand and control this phenomenon.

An innovative combined drilling and burnishing tool has been developed and tested. The results obtained show a significant increase in the level of residual stresses in the wall of the hole, compared to a conventional orbital drilling process, especially on smaller diameter holes. Fatigue tests are continuing to correlate the results observed in helical burnishing with the fatigue strength of aeronautical assemblies. 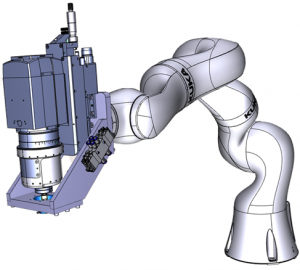 A compact and lightweight orbital drill head has also been designed and fully tested. Its performance and very light weight make it possible to envisage its use at the end of a robotic arm.

The adaptation of the drilling head on robotic arms from KUKA has been studied dynamically, in order to define and optimize the phenomena of rigidity and resistance to vibrations. The IIWA arm was ultimately found to lack rigidity for the intended application, but the KR60 arm proved to be
perfectly suited.

The progress made within the framework of the RODEO project makes it possible to seriously consider the achievement of the ambitious objectives initially assigned. The control of the level of residual stresses in the small holes of a stack containing aluminum appears realistic, even if additional
studies deserve to be carried out. The drilling tool and the drilling head have been successfully associated with a robotic arm to constitute an integrated validated robotic orbital drilling system, light and compact, capable of carrying out the work expected by the aeronautical contractors involved in Clean Sky 2.

Feel free to contact the project partners to study with them an adaptation of this technology to your own industrial needs.

Disclaimer : this document reflects only the author's view. The JU Clean Sky 2 is not responsible for any use that may be made of the information it contains.